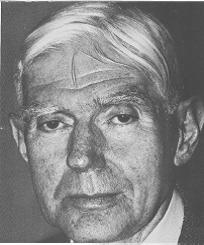 Karl F. Herzfeld was born in Vienna, Austria in 1892. He completed his doctoral studies at the University of Vienna and studied with Einstein in Zurich in 1914. After serving in the Austrian army during World War I, he became a faculty member at the University of Munich, where he stayed from 1919 until 1926, collaborating with Sommerfeld. Among his students were Pauli, Heitler, and Heisenberg.

In 1926, Herzfeld came to the United States to accept a professorship at Johns Hopkins University. In 1936 he became Chairman of the Physics Department at The Catholic University of America, a position he held until 1961. He continued to teach until 1970, and to be active professionally until his death in 1978.

Among Herzfeld’s many research interests were the mechanisms of sound absorption in gases, liquids, and solids, the theory of the binding of atoms in crystal lattices, and the foundations of statistical mechanics and thermodynamics. During his distinguished career he was the author of more than 130 scientific articles and co-author of 14 books. He received many honorary degrees, medals, and was awarded the Navy’s highest civilian award. He was elected to membership in the National Academy of Science.

Any description of Herzfeld that did not include his profound interest in philosophy and theology would be inaccurate and incomplete. He contributed many scholarly articles on the relationship between the humanities and science. Karl Herzfeld’s impact on science derives not only from his own scholarship, but also from his influence on those who studied under him. As the beloved professor of hundreds of students, he had a profound impact on both the professional and spiritual aspects of their lives.